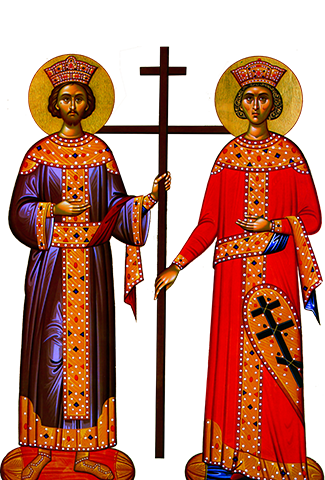 The saints of the church, who are alive in Christ, are not only models whose lives and devotion to God we should strive to emulate, but also are intercessors to God. Individual faithful and parish communities are called upon to take a patron saint, in the tradition of the Holy Orthodox Church. Early churches were built at the site of the graves of many of the Holy Martyrs. These communities were dedicated with the name of the martyr, and he or she was called upon by the community who worshiped there to act as an intercessor and protector for the faithful. Churches today place relics of the saints inside the Altar table as well as in places for veneration in the church in remembrance of these holy men and women in our lives.

About Saints Constantine and Helen

On May 21st our Orthodox Church celebrates the Feastday of a mother and son whose influence on Christianity may never be duplicated. Satints Constantine and Helen each gave gifts to what we affectionately call the Christian faith. Saint Constantine was a skilled leader of men and a powerful Emperor.  What did Constantine have to gain by allowing Christianity to be taught and practiced throughout the Empire? It was under the reign of Constantine that Christianity was able to take its position as a Faith and begin to grow, not only in numbers but also in stature.

Anyone who has ever had the opportunity to visit the grand city of our Church, Constantinople, can attest to the beauty and prominence of the city, which is dedicated to Saint Constantine. Constantinople stands a memory to Constantine whose dream it was to turn the ancient City of Byzantium in a a Christian city who architecture would be dedicated to the glory of God.

So many things can be said about Saint Constantine, but the one that should be stressed is his dual purpose with his beloved mother, Saint Helen. One only has to look at an icon of these two great Saints of our Church and notice the Cross  that stands between them. History tells us that Saint Helen discovered the Cross of Christ during a tour of Golgatha, and the Constantine was victorious in battle, a crucial battle, fighting under the banner of the Cross.

Apolytikion in the Fourth Tone

Your voice resounded throughout the world that received your word by which, in godly manner, you taught dogma, clarified the nature of beings, and set in order the character of people. Venerable father, Royal Priesthood, intercede to Christ God to grant us great mercy.

Kontakion in the Fourth Tone

For the Church art thou in truth a firm foundation, granting an inviolate lordship unto all mortal men and sealing it with what thou hast taught, O righteous Basil, revealer of heavenly things.